In news this week: Nike, Porsche and Tag-Heuer have all suspended their sponsorships of Maria Sharapova after she announced to the world that she had tested positive to a banned substance at the Australian Open. 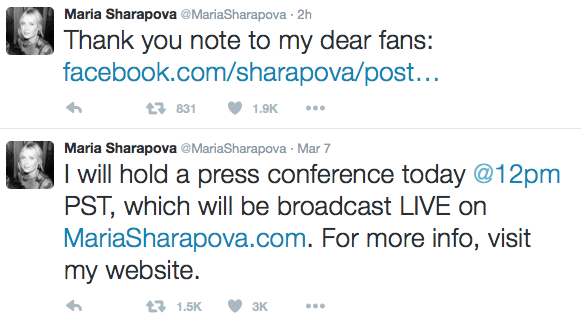 This is a loss for the tennis legend and a swift manoeuvre from her sponsors to disassociate their brands from the negativity (of a positive drug test).

Sharapova or her agents started to manage the situation early. She had her game face on. She called a press conference in LA straight away. Fronted up to the media and her public and explained why she was on the drug.

Meldonium, which Sharapova said she had legally taken throughout her career, was placed on the banned list by the World Anti Doping Agency (WADA) at the beginning of the year following “evidence of its use by athletes with the intention of enhancing performance”.

Dressed head-to-toe in black corporate attire, she said: “I let my fans down, I let the sport down that I have been playing since the age of four and I love so deeply.” One of the world’s richest sports stars went on to say: “I know with this I face consequences. I don’t want to end my career this way and I really hope I will be given another chance to play this game.”

She had apologised to her fans, but via social media not so much as a flutter post press conference from Sharapova. Until today, when she posted a thank you to her dear fans – on Facebook with a linked to her post on Twitter.

When will companies and celebrities recognise that social media platforms need their attention too? When will they learn that they are a conversational tool and not a broadcasting tool alone.

There was one twitter comment alerting her 2 million plus fan base to the upcoming press conference. And then radio silence – and even though there was plenty of support with ‪#‎IStandWithMaria‬ and ‪#‎LetMariaPlay‬making it could seem to some that she was hiding in the dark, avoiding the aftermath. Not giving her side of the story.

She did acknowledge the support noting that she had remained offline on purpose and her friends had supplied a collage of comments.

When will people and companies learn that social media is a tool to converse with other people, and like in “real life” keep that conversation flowing. It’s a two-way street. Answer the publics questions. Keep the faith.

There was an error retrieving images from Instagram. An attempt will be remade in a few minutes.