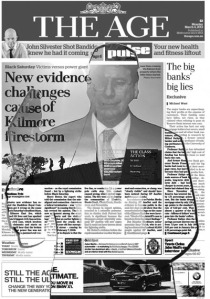 It has been a week of change.

We woke up Monday morning with a new compact edition of The Age.

A very exciting change to kick off the week. Easier to read on the commute to work. Easier to digest with the morning cereal. And the same quality we’ve come to expect and demand from the daily newspaper.

If that wasn’t enough change for the week, Thursday morning Victorians from Abbotsford to Zeerust woke up with a new Premier. Ted was out, Denis was in.

After a couple of weeks of controversy involving secret tapes, resignations and confidence checks, Ted Baillieu made a tearful farewell and handed over the keys to Spring Street.

It certainly gave the media something to talk about and provided a number of front pages for the new compact version of The Age.

It’s now time for Denis Napthine and his cabinet colleagues to re-set their strategy and tackle the big challenges head on.

The Age’s communication strategy needs to focus on convincing its readers that the quality remains, even though the paper has been trimmed down. The best way to do this is by continuing to deliver high quality content.

In addition, they’re using communications to demonstrate the variety of ways people consume The Age every day from the physical paper to social media to the iPad edition. They’re embracing the digital users, rather than running away from them. And they’re doing a great job painting a picture of all of the different people who read their newspaper, check out the supporting advertising campaign around town with the taxi driver and other professionals who consume the compact on a daily basis.

For the new Premier, his communication will need to focus on clearly articulating his vision for Victoria and showing that he has the leadership credentials to take Victoria forward.

He’ll need to focus on activities that get things done. He’ll need to engage people. Listen to people. And take their ideas and suggestions into consideration.

At the same time he is developing a communication platform for governing Victoria, he’ll also need to begin considering how he communicates in the lead up to next year’s state election.

There will be many hours invested in developing and implementing communication strategies for both of these changes in Victoria.

Now all we need is a cool change. No communication strategy required.

Have a cool and colourful weekend.