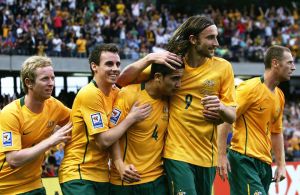 While not everyone in the c word office is a World Cup tragic, we are all marketing tragics. So we have been interested in the Socceroos performance at the World Cup, and how the marketing of the round ball game continues in this country.

There are some big sponsorship dollars involved with Optus, Sony, Coles and even Weet-Bix heavily promoting the game. But with strong competition from codes like the ALF and NRL, will they continue to do so if the Socceroos don’t perform beyond expectations?

Prior to reaching the 2006 World Cup, you would not have seen the Socceroos on merchandise at all. However qualifying after thirty years and reaching the Top 16 instantly boosted the profile of the game in Australia.

Even thought the Socceroos have not performed as well as four years ago, they have still reached the pinnacle of the international stage in a truly world sport.

Football Federation Australia now has the difficult task of competing with other codes for audiences, participation, TV coverage and sponsorship; but certainly not an impossible one. The game has been on a course of constant growth and change for many years. Back in the National Soccer League days, the teams had strong affiliations with their ethnic roots and crowds reflected this. Italians went to watch Marconi, Greeks watched South Melbourne Hellas and the Croatians barracked for either Sydney or Melbourne Croatia, depending on their city.

The A-League has certainly made significant inroads here, with crowds exceeding 20,000 for high profile games. Although the quality of the game and its players has increased, the A-League can’t compete with the financial rewards of an overseas contract. Currently, there are more than 100 Australians playing internationally.

Despite this, there is definitely an appetite for football in this country. Soccer is one of the Top 10 sports played in Australia among men and women despite the minimal mainstream TV coverage. That said, 1.4 million Australians tuned in to watch Germany dash the Socceroos World Cup hopes with a 4-0 thrashing and similar numbers watched the team play against Ghana. Even 3AW’s This Sporting Life, which is AFL centric, committed significant airtime to discuss the merits of the teams, tactics and who the next coach of the Socceroos will be.

So what does Football Federation Australia have to do the keep building the game in Australia?

1. Firstly, playing on the world stage is paramount for promoting the game. Hiring a stand out coach for the Socceroos and player development are key. Not much a marketing department can do about that, however a successful team makes it an easier sell for sponsors and the general public.

2. Continue to build interest among children and future players. School visits by A-League players and Socceroos are necessary to keep the interest alive for younger fans. I love the Optus Small Sided Football competition to win a training session with Lucas Neil. Keep doing this Football Federation Australia. I’d be interested to know how well this site is doing.

3. World Cup bid 2022 – let’s get this right. To bring the world stage to our doorstep would be phenomenal. South Americans and their drums, African and their vuvuzelas (maybe…not), the Dutch, Germans, English and Italians. World Cup is a world party and who wouldn’t want to be a part of that.

4. Select ambassadors that children and adults relate to. Tim Cahill is great. And Schwarzer – is anyone not impressed when he saves a goal? Let’s use some local based players too like Archie Thompson. There was a missed opportunity to market our next hope. Who is he? I want to know who I’m going to be cheering for over the next few years. We all know the old guard will not be around so this was a failure to not start profiling our next champions.

5. Celebrate the history of the game, especially in this country. Let’s see some old video footage from the good old days. This is more for us older folk but it’s great to reminisce. It doesn’t need to just be about the Socceroos. Let’s profile those trailblazers like Craig Johnstone. That 1986 F.A. Cup final goal he scored for Liverpool is one of my first memories of the game.

6. Marquee players, local and international. Let’s pay for them to play here. And use them to boost the presence of the game

Well done to the Socceroos to secure a win against Serbia last week. A Gallant effort.

So now let’s hope the sponsors are committed to the development of the game long term. What else can we do?

While you have your thinking caps on, check out the new ad for the upcoming Hyundai A-League season created by BMF. I got a chuckle out of it.