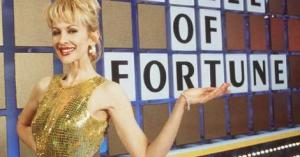 Like many people who grew up with Adriana Xenides on our television screens, I was sad to hear of her passing at the young age of 54.

In the hey days of the 1980s, Adriana Xenides was the epitome of fashion, style and grace. I know this is a game show we’re talking about!! However she could’ve easily wandered into a scene from Dynasty and looked at home, apart from the hair-pulling cat fights between Crystal Carrington and Alexis. Adriana was too classy for that.

So was this her appeal? Why was she universally loved? In an era renowned for its excesses, crassness and “greed-is-good” attitude, did the beautiful and nice girl from Buenos Aires win us all over with her warm and generous smile?

Australian television lacks the glamour and grace that Adriana brought to our screens daily. Does anyone even come close? I can’t think of anyone.